In late June 2021, Facebook announced Live Audio Rooms and Podcasts. A new feature that up until recently was only available to select public figures and select Facebook groups. This particular addition to the social media giant app was introduced to offer the ability for creators to spread their message and expand their footprint.

It’s no secret that the rise of audio and podcasts has fueled the craze behind allowing creators of all walks of life to forge stronger awareness around their brand. For instance, 51% of Americans who listened to podcasts were women and 49% were men. That’s quite the hype around audio podcasts. Is Facebook too late to the audio podcasting game though? Is there any benefit to using the Facebook Live Audio Rooms and Podcasts in effort to expand your brand footprint? 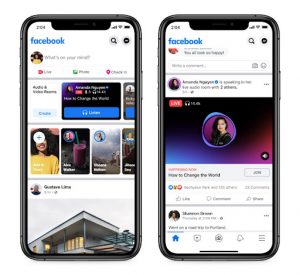 Facebook still remains in the Top 5 social media networks in the world. Leveraging its brand equity and authority in the social media space is definitely a viable approach.

Facebook has invested a significant amount of time and effort in ensuring that its latest feature delivers a powerful experience. Live Audio Rooms are visible directly at the top in the Facebook mobile app. Precisely in an area where a vast majority of visitors interact with the most. You can either jump into a pre-existing live audio room that another user/friend has created or create one of your own.

How to Join an Existing Live Audio Room

The new Facebook Live Audio Rooms feature is equally beneficial for creators and brands. A vast majority of small businesses specifically have turned their personal Facebook profile as a way to expand their visibility. This is mainly due to the continuously declining or practically non-existent organic reach of Facebook Business Pages. So, as a creator, you can forge new conversations and build new relationships using audio. As a small business, you can do the same by leveraging your personal Facebook profile. 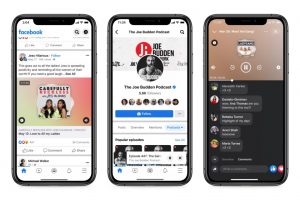 How are podcasts different from live audio rooms, you might ask? Live audio rooms are a great way for real-time audio, perhaps even streaming a live podcast episode where you can interact with a live audience. The new podcasts are different in a way that they provide a more true audio podcasting experience.

The new Facebook Podcasts seem to be a truly full blown interactive experience. Unlike traditional podcasts, it will provide listeners with a way to engage. This is great for creators where they can acquire real-time feedback and carry a conversation with their fans. Getting to a podcast is simply a matter of utilizing the search feature and then finding a podcast of your choice.

Facebook has announced that in late 2021 they will roll out additional features such as captions and audio snippets. The captions feature will allow podcasters to caption each episode of their podcast. This is a great feature given that 90% of audio and video is engaged while on mute for at least the first 10 seconds or so before a user unmutes the media. The audio snippets will be short clips where a podcast creator can create a teaser of an individual episode and able to share it with their audience.

[…] Put any events your business is having, like sales, webinars, or live streams.  […]

Have an idea for a project you'd like to discuss? We are all ears.